Welcome to the 7th day of The Tsar’s Guard Spotlight Tour hosted by Brittany’s Book Rambles! I am so excited to be part of this tour, which highlights our love for The Crown’s Game and one of our most anticipated 2017’s releases, The Crown’s Fate. Today I will be matching the main characters to teas that reflect their traits and personalities. Do not forget to enter the giveaway below for an ARC of The Crown’s Fate. And be sure to stop by each of the tour spotlights to check how some more great posts about The Crown’s Game series.

RED HOT CINNAMON ORGANIC BLACK TEA: As an enchanter, Vika has amazing power over the elements. Although she is a force of nature, Vika is also very loyal. Just like black tea, she is strong and bold. And like cinnamon, she is truly the “lightning girl”: fiery, fierce, and unpredictable.

EARL GREY MOONLIGHT TEA: Beyond being an enchanter, Nikolai has impeccable talent in mechanics, tailoring, and dancing. Like any earl grey tea, he is sharp and powerful, with a hint of sweetness. As a friend and competitor, he is very patient, admirable, and kindhearted.

EMPEROR’S CLOUDS AND MIST® GREEN TEA: As a master of disguise, and a member of Russian royalty, Pasha has a good soul full of laughter and enthusiasm. Like green tea, he is strong, but wistful, sweet, and carefree. Pasha is loyal and positive, but oftentimes he falls short from being responsible.

The gorgeous and darkly compelling sequel to The Crown’s Game—perfect for fans of Red Queen and Shadow and Bone.

Magic is growing, shadows are rising, and the throne is at stake…

Russia is on the brink of great change. Pasha’s coronation approaches, and Vika is now the Imperial Enchanter, but the role she once coveted may be more difficult—and dangerous—than she ever expected.

Pasha is grappling with his own problems—his legitimacy is in doubt, the girl he loves loathes him, and he believes his best friend is dead. When a challenger to the throne emerges—and with the magic in Russia growing rapidly—Pasha must do whatever it takes to keep his position and protect his kingdom.

For Nikolai, the ending of the Crown’s Game stung deeply. Although he just managed to escape death, Nikolai remains alone, a shadow hidden in a not-quite-real world of his own creation. But when he’s given a second chance at life—tied to a dark price—Nikolai must decide just how far he’s willing to go to return to the world.

With revolution on the rise, dangerous new magic rearing up, and a tsardom up for the taking, Vika, Nikolai, and Pasha must fight—or face the destruction of not only their world but also themselves.

Win an ARC of The Crown’s Fate (Open International) 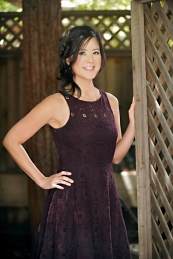 Evelyn Skye is the New York Times bestselling author of THE CROWN’S GAME (out now!) and THE CROWN’S FATE (May 16, 2017). She was once offered a job by the C.I.A., she not-so-secretly wishes she was on “So You Think You Can Dance,” and if you challenge her to a pizza-eating contest, she guarantees she will win. When Evelyn isn’t writing, she can be found chasing her daughter on the playground or sitting on the couch, immersed in a good book and eating way too many cookies.