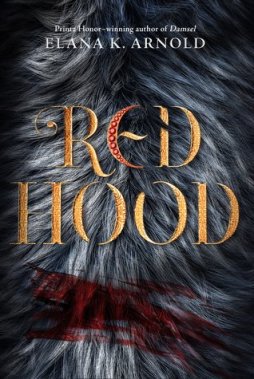 You are alone in the woods, seen only by the unblinking yellow moon. Your hands are empty. You are nearly naked.

And the wolf is angry.

Since her grandmother became her caretaker when she was four years old, Bisou Martel has lived a quiet life in a little house in Seattle. She’s kept mostly to herself. She’s been good. But then comes the night of homecoming, when she finds herself running for her life over roots and between trees, a fury of claws and teeth behind her. A wolf attacks. Bisou fights back. A new moon rises. And with it, questions. About the blood in Bisou’s past and on her hands as she stumbles home. About broken boys and vicious wolves. About girls lost in the woods—frightened, but not alone.

As a novel mainly told in second person point of view, Red Hood by Elana K. Arnold is a very jolting and raw story. The main character, Bisou, does not shy away from being so up front, straightforward, and brutally honest when it comes to her actions, emotions, and womanhood. Closely based off the didactic fairy tale, “Little Red Riding Hood,” Red Hood proposes the same moral stance–“always be aware and cautious, because every one has a hidden agenda.”

Similar to Buffy in the 1992 movie Buffy the Vampire Slayer, the main character in Red Hood depends on her menstrual cycle to fight and hunt, in her case, werewolves. Throughout the book, Bisou is bombarded with conflicts that relate to the gruesome and tense scenes of protecting herself and the women around her. The author does an excellent job of allowing Bisou’s narrative to become part of the reader’s own story, throwing you in the thick of every nail-biting choice that Bisou makes.

Red Hood has some very terrifying and tense moments, but overall this novel is a constant page turner. The book explores so many modern issues that are often socially avoided: periods, teenage sex, rape, abortion, slut-shaming, toxic masculinity, and domestic violence. Filled with female empowerment, justice, and self defense, Red Hood will leave you in shock and awe.

WIN a copy of RED HOOD  (USA only) 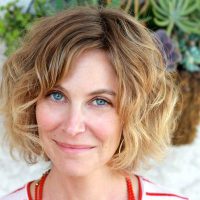 ELANA K. ARNOLD is the author of critically acclaimed and award-winning young adult novels and children’s books, including the Printz Honor winner Damsel, the National Book Award finalist What Girls Are Made Of, and Global Read Aloud selection A Boy Called Bat and its sequels. Several of her books are Junior Library Guild selections and have appeared on many best book lists, including the Amelia Bloomer Project, a catalog of feminist titles for young readers. Elana teaches in Hamline University’s MFA in Writing for Children and Young Adults program and lives in Southern California with her family and menagerie of pets.

Note: Thank you to the The Fantastic Flying Book Club for having me on this blog tour. And a huge thank you to Harper Teen for providing me an e-ARC to read and review for free in exchange for an honest review. All statements and opinions are my own. Please note that all quoted material is not final and may change in the final publication of the book.