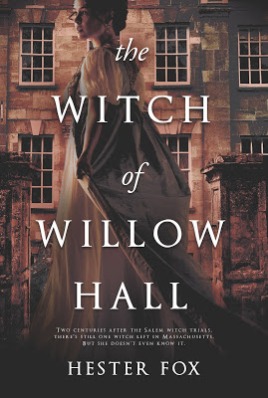 Two centuries after the Salem witch trials, there’s still one witch left in Massachusetts. But she doesn’t even know it.

Take this as a warning: if you are not able or willing to control yourself, it will not only be you who suffers the consequences, but those around you, as well.

In the wake of a scandal, the Montrose family and their three daughters—Catherine, Lydia and Emeline—flee Boston for their new country home, Willow Hall.

The estate seems sleepy and idyllic. But a subtle menace creeps into the atmosphere, remnants of a dark history that call to Lydia, and to the youngest, Emeline.

All three daughters will be irrevocably changed by what follows, but none more than Lydia, who must draw on a power she never knew she possessed if she wants to protect those she loves. For Willow Hall’s secrets will rise, in the end…

Advance Praise:
“Hester Fox’s THE WITCH OF WILLOW HALL offers a fascinating location, a great plot with history and twists, and characters that live and breathe. I love the novel, and will be looking forward to all new works by this talented author!” –Heather Graham, New York Times bestselling author
“Beautifully written, skillfully plotted, and filled with quiet terror, readers will devour this absorbing, Gothic tale of romance and suspense. Perfect for fans of Simone St James and Kate Morton.” — Anna Lee Huber, the national bestselling author of the historical Lady Darby Mysteries
“Beautifully written, with an intriguing plot full of suspense and mystery, The Witch of Willow Hall will cast a spell over every reader.” — Lisa Hall, author of Tell Me No Lies and Between You and Me
“I was entranced by this intriguing and spellbinding novel with its messages of love and loyalty and being true to who you really are. I hope Hester Fox goes on to write many more such novels–I for one will be buying them.” — Kathleen McGurl, author of The Girl from Ballymor
“With its sense of creeping menace and chilling undertones, this compelling story had me gripped from the first page. The vividly drawn characters cast their spell so convincingly, I couldn’t stop reading until I discovered what happened to them. A wonderful debut novel.”–Linda Finlay, author of The Flower Seller

THE WITCH OF WILLOW HALL by Hester Fox
“It’s too hot for coffee,” Emeline announces suddenly, even though she’s not allowed to have a sip of the beverage. “It’s too hot for dresses and shoes and hair and fingernails. It’s too hot for stockings and feathers and fur.”
Mr. Barrett and Father break off their conversation, and si­lence falls over the parlor. Mother shoots our guests an apolo­getic look and then a pleading one at Emeline. “I’m so sorry. It’s past her bedtime and she’s getting tired.”
But Emeline isn’t done. She’s goes over to Mr. Barrett and looks up at him. “It’s too hot,” she repeats. “And I’m not tired at all. There’s a pond behind the house, did you know? I want to go to the pond and see the mermaids.”
I should take her upstairs to bed, but I don’t move. Mr. Bar­rett is looking down at her with a queer expression, a crease between his brows. She takes his hand in hers. His aren’t ta­pered and elegant like Cyrus’s; Mr. Barrett’s hands are capa­ble, strong, and Emeline’s hand completely disappears in his. “Please, let’s go to the pond where it’s cool and we can swim with the mermaids. I want to go play with the little boy at the pond.”
“What little boy? What on earth are you talking about, Emmy?” But Emeline ignores Mother’s question and her lip begins to tremble when it becomes clear that she isn’t going to get her way.
By this time even Catherine and Mr. Pierce have paused in their giggles and whispers and both are staring. Crimson spreads over Catherine’s face. “Really, Emeline. Leave poor Mr. Barrett alone.”
Mother gets up slowly, and I can tell she doesn’t have the energy for this. “It’s dark out, Emmy. And Mr. Pierce and Mr. Barrett have business to discuss with your father.” She reaches out to take her hand, but Emeline dives out of her grasp.
I’m mortified. I understand Emeline, but Mr. Barrett will never return to our house if she behaves like this. I try to catch her attention, but she misses the cautioning look.
“I don’t want to go to bed!” I’ve never seen Emeline in such a pout before. She must be tired beyond reason, and the heat certainly isn’t helping. Hands clenched at her sides, she looks as if she’s on the verge of bursting into tears. But instead she just stomps her little foot.
But just as her foot comes down on the carpet, both doors slam shut with a great bang.
Mother jumps, Catherine lets out a little cry and Father’s eyebrows look as if they are about to fly off his face. The room goes silent, the only movement the residual wobbling of a vase on the table.
We all look at each other. Even Emeline looks surprised, because if we didn’t know better, it was almost as if she caused the doors to fly shut with her foot.
Father is the first to speak. He clears his throat and glances around. “Must be the wind,” he mumbles. “You think you have a house built new and it wouldn’t be full of drafts and loose doors, but I suppose there’s no such thing as peace of mind in New England construction.”
Mother is quick to agree with him, and Mr. Pierce gives a dubious nod. But we all know that there was no breeze, that it’s been so still that a feather would have hardly quivered, let alone two doors slamming. No one wants to say so though at the risk of frightening Emeline. 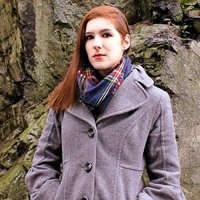 Hester comes to writing from a background in museum work and historical archaeology. She loves the Gothic, the lurid, the dark…so long as the ending is a happy one. She has never seen a ghost, though she remains hopeful.

Hester lives outside of Boston with her husband. THE WITCH OF WILLOW HALL is her first novel.

4 thoughts on “Book Blitz: The Witch of Willow Hall by Hester Fox”