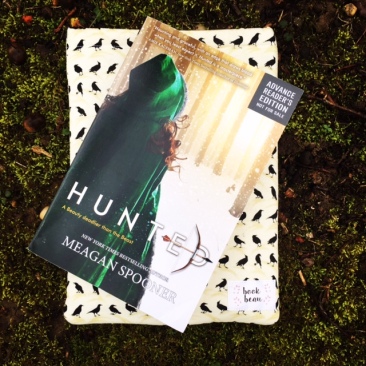 Beauty knows the Beast’s forest in her bones—and in her blood. Though she grew up with the city’s highest aristocrats, far from her father’s old lodge, she knows that the forest holds secrets and that her father is the only hunter who’s ever come close to discovering them.

So when her father loses his fortune and moves Yeva and her sisters back to the outskirts of town, Yeva is secretly relieved. Out in the wilderness, there’s no pressure to make idle chatter with vapid baronessas…or to submit to marrying a wealthy gentleman. But Yeva’s father’s misfortune may have cost him his mind, and when he goes missing in the woods, Yeva sets her sights on one prey: the creature he’d been obsessively tracking just before his disappearance.

Deaf to her sisters’ protests, Yeva hunts this strange Beast back into his own territory—a cursed valley, a ruined castle, and a world of creatures that Yeva’s only heard about in fairy tales. A world that can bring her ruin or salvation. Who will survive: the Beauty, or the Beast?

I wrote my review on Hunted last week (check it out HERE), and was deeply inspired to write another post, pairing characters with tea blends. In Hunted, tea plays a small role as the remedy for comfort, because it warms the soul, calms the nerves, and steadies the mind. Below I have picked my three favorite characters in Hunted and paired them with what I think are the perfect tea flavors based on their personalities and traits. Enjoy!

RUBY SPICE CIDER TEA BLEND: Yeva is one of my favorite heroines in YA literature, because like this spice cider tea, Yeva’s personality is vibrant. She is a fighter and a survivor. I love how badass, daring, and determined is she throughout Hunted. And in comparison to this noted tea, Yeva is sweet and fierce.

LAPSANG SOUCHONG TEA: The tea blend of Lapsang Souchong tastes rich and earthly, with a strange aroma that is wild like Beast. Just as Beast has two competing personalities (the wolf and man), this tea blend has the dual taste of sweet and smokey.  Beast’s mannerisms often hint to a helpful and playful personality, but like a majority of black teas, he is also strong and bold.

NIRVANA GREEN TEA: Yeva (“Beauty”) is a hunter, and like any hunter, she has her most loyal friend and canine companion, Doe-Eyes. Doe-Eyes is always happy to see Yeva, and with every tail-wag, she brings content to Yeva’s life. In comparison to the Nirvana Green tea blend, Doe-Eyes is also sweet, fun, and energetic.

I cannot wait for everyone to read Hunted. Once you have read it, please feel free to stop by and comment what tea flavors you would match to your favorite characters. I would love to see what you come up with and maybe even try out some new tea blends.