Book Blurb of Unrest (Book Two in the Unknown Series):

Being on the run in the desert means food and sanctuary are hard to come by, but Amber Tate and her crew are not about to give up. Not after having so many of the things they love brutally ripped from them by an unknown enemy who sent their world into the apocalypse.

Survival takes precedence, but once safe shelter is found, their guards fall and the emotions they’ve been holding in are finally released. Anger, insecurities…lust. In their tight quarters, Amber, Rylen, Tater, and Remy can’t escape it. The past must be faced, and passions run even stronger in the darkest of times.

In the midst of unrest, their worlds are rocked again when they discover the truth about the war that’s ruined their lives. They thought finding out the enemy’s identity would give them the edge; instead it’s revealed terrifying dangers they never thought possible.

AND NOW THE REVEAL… 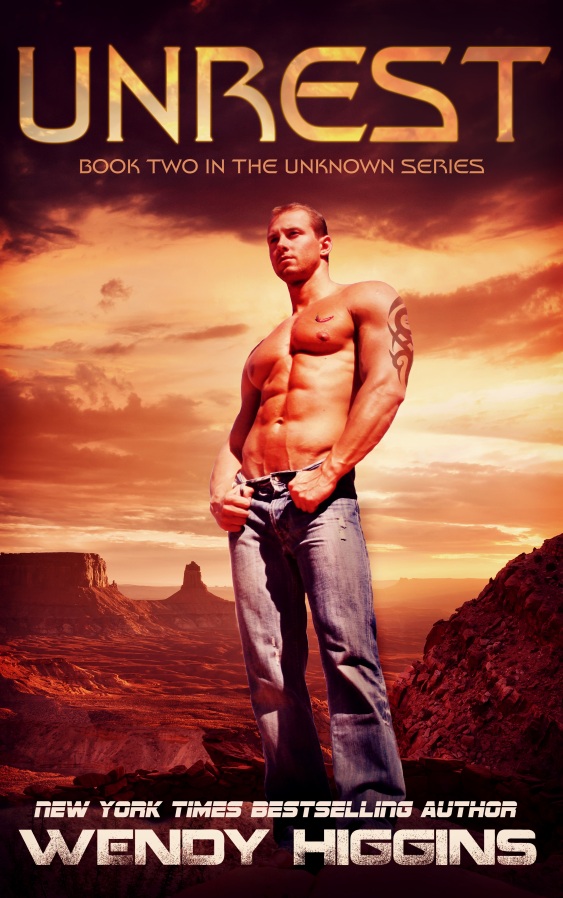 CATCH UP WITH THE SERIES and BEGIN READING UNKNOWN

Amber Tate believes the worst thing she’ll suffer in life is dealing with the unrequited love she feels for her brother’s best friend, Rylen Fite. She also believes war is something unfortunate that happens places far, far away from her rural Nevada town. She’s wrong on both counts.

When an unknown organization meticulously bombs major cities in the United States and across the globe, a trickle-down effect spreads to remaining towns at an alarming speed—everything from food and water sources to technology and communications are compromised. Without leadership, the nation is split between paralysis and panic, but Amber isn’t one to hide or watch helplessly. She’s determined to put her nursing skills to use, despite the danger, even if it means working alongside the man she can never have.

In this first installment of NY Times bestselling author, Wendy Higgins’s debut New Adult series, a frighteningly realistic apocalyptic America is brought to life, entwined with searing romantic tension that will leave you eager for more.

See the giveaway details
at Goodreads.

Wendy Higgins is the USA Today and NY Times bestselling author of the SWEET EVIL series from HarperTeen, the high fantasy duology THE GREAT HUNT, and her independently published Irish Fantasy SEE ME.

After earning a Creative Writing degree from George Mason University and a Masters in Curriculum and Instruction from Radford, Wendy taught high school English until achieving her dream job as a full-time writer.

Wendy lives on the Eastern Shore of Virginia with her husband, daughter, son, and little doggie Rue.